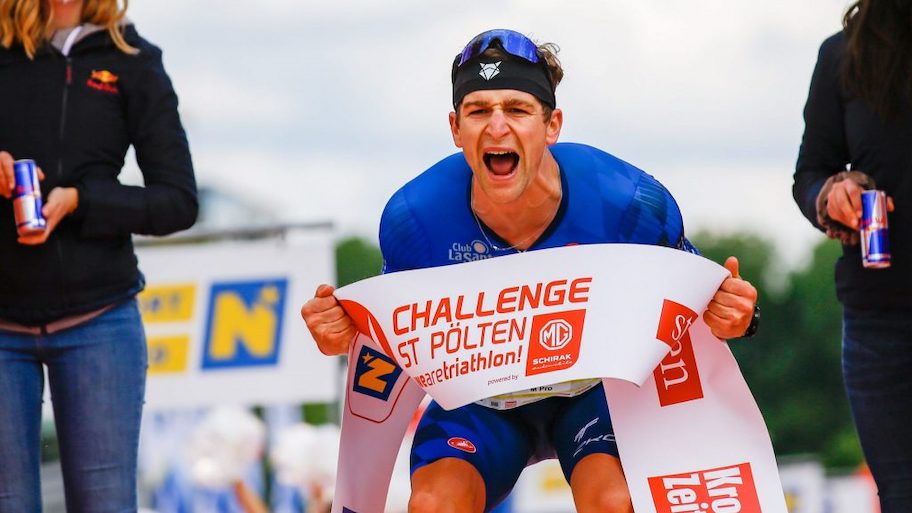 This is a preview of the 2022 St. Pölten Challenge – you can read our full race reports on how Nicolas Mann made his mark in the men’s race while Lucy Buckingham survived a late scare to win the Women’s Pro title.

The Austrian town of St. Pölten has hosted major triathlon events for many years. Historically linked to the M-Dot banner, the first St. Pölten Challenge took place 12 months ago.

It was a race that saw Anne Haug (GER) overtake Imogen Simmonds (SUI) in the very last stages of the race. In the men’s race, Frederic Funk (GER) blew through the peloton on his bike to win by almost five minutes.

The race will be streamed live (embedded below), and also accessible via the Challenge Family website under the Live tab, with a timing/tracker link.

The race begins with a 1.9km swim lap, but with a twist. Starting at Vienhofer See, athletes will exit after approximately 1km, then run approximately 200m to a second lake, Ratzersdorfer See, to complete the opening discipline before arriving at T1.

The bike course is also a ride, mostly flat and fast for the first half, before some decent uphills and downhills through the Wachau World Heritage area.

No Frederic Funk this year (he will run at home at 70.3 Kraichgau), but third since last year, Maurice Clavel (GER), returns.

A member of the hep sports team, Clavel, 34, achieved the biggest success of his career in November 2021 when he won the IRONMAN Africa Championship in Port Elizabeth. He recently warmed up at the iconic Buschhutten Triathlon in Germany (eighth), but this will be his first long-distance race of the year. [UPDATE – Apparently Maurice will not be starting due to illness].

As expected, many German and Austrian names are set to race on Sunday. Notable among them include Andreas Bocherer (in his retirement season) and Nils Frommhold. They won the previous IRONMAN 70.3 event here in 2015 and 2016 (Böcherer) and 2017 (Frommhold).

Other names trying to overthrow the Germans will be Giulio Molinari (ITA), third in 2018 and Tokyo Olympian, Lucas Hollaus (AUT), who finished second at the IRONMAN 70.3 Zell am See last year.

While on the start list, Tom Davis opted to skip the race after his strong championship performance last weekend in order to focus on his preparations for Challenge Roth.

Barely a week after The Championship, Great Britain Lucy Buckingham will be looking to extend the form she has shown there in Austria – and a podium finish in the process. No Sara Perez Sala this week, so all indications are that it’s probably going to be a lonely day…hopefully to the finish line, from her perspective. With, at the time of writing, modest temperatures predicted, conditions also look good for Lucy.

Having gotten COVID just before the Championship, we’re going to assume that Amelie Watkinson (NZL) won’t be able to start here either, especially since she should be one of Nicola Spirig’s pacemakers in the Sub8 project very soon. Horrible timing, heal Amelia quickly.

Grace Thek (AUS) was eighth at Samorin, but if Watkinson can’t start then you have to make Buckingham the favorite to win this one – a result that would see them climb to second place in the Challenge Family World Bonus rankings.

Total funds will be paid out in six depths, as follows:

As a Challenge Family event, there is also a third potential revenue stream for athletes, through the Challenge the family world bonus!

Dog cuddling with his little puppy brother for the first time. Watch | Tendency