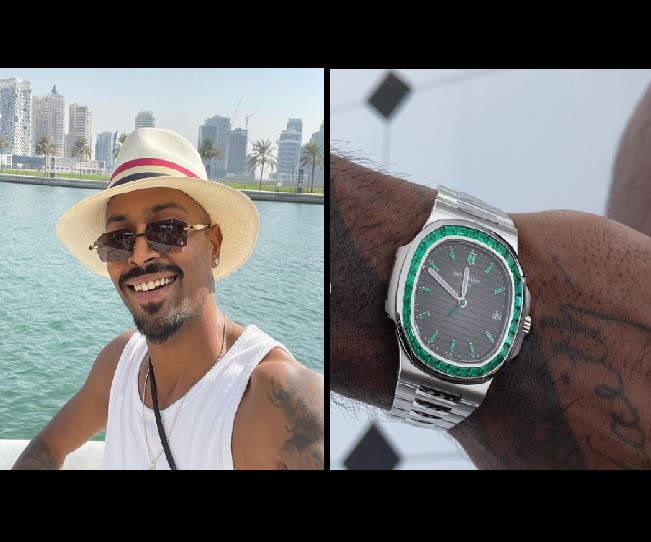 New Delhi | Jagran Entertainment Office: Hardik Pandya, a versatile Indian squad player and star of the Mumbai Indians, is known to love things extravagant and lavish, which is quite visible on his social media handles. From home to his attire, the 27-year-old cricketer is a fan of expensive brands.

Pandya is currently in Abu Dhabi, awaiting the start of the second edition of the Indian Premier League (IPL) 2021 on September 19. In a recent post, he could be seen in a Rolls Royce Cullinan, donning a tank top, hat, and sunglasses.

However, what caught the eye of netizens was the last slide in the series of photos, where Pandya could be seen sporting an ultra-rare Patek Philippe Nautilus Platinum 5711 with green emeralds on it, on her wrist. . The watch’s most eye-catching feature is its 32 factory-set baguette-cut emeralds. The watch is all platinum and is estimated to cost around 5 crore.

Pandya’s clock date window is set at 3 o’clock. It receives an automatic movement with automatic winding, with a power reserve of 45 hours. The movement can be seen in action through the sapphire crystal display caseback. Also, the 5711 range is already rare and the emerald model with a dark gray dial is much rarer.

Earlier, Pandya and her older brother Krunal bought an 8 BHK apartment in Mumbai. Its floor space is 3838 square feet and its price is around 30 crore.

Meanwhile, the long-awaited IPL 2021 is set to resume in the United Arab Emirates from September 19, where the 2021 ICC T20 World Cup will also be held, just after the completion of the 2021 IPL. Mumbai Indians, Hardik’s local team, reached Abu Dhabi on August 13 and completed their quarantine at the luxurious St. Regis Saadiyat Resort in Abu Dhabi.