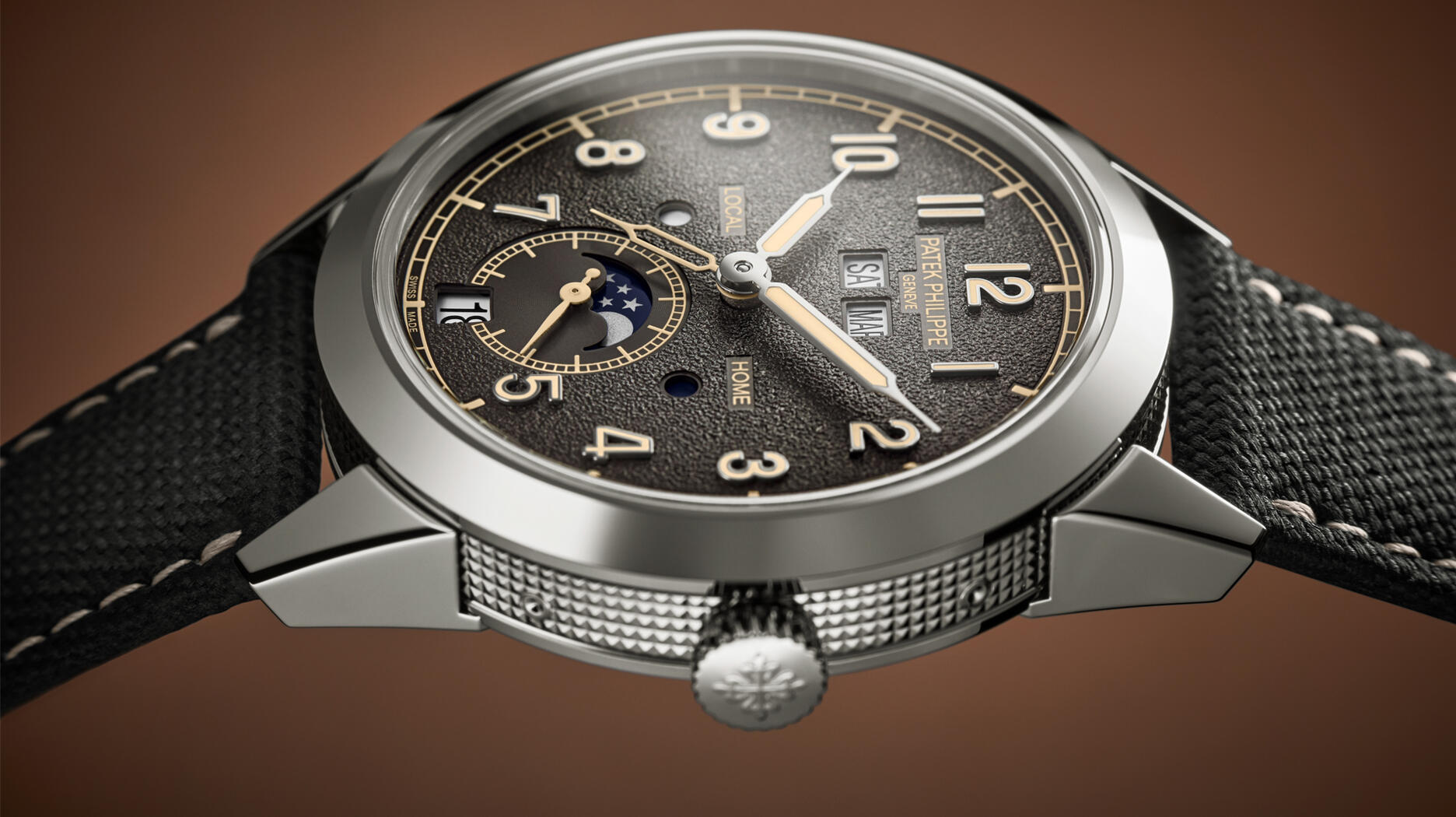 The result is the self-winding caliber 31-260 PS QA LU FUS 24H, featuring an annual calendar, which requires manual correction once a year, and the travel time system which displays a second time zone.

The caliber has eight patents.

The annual calendar mechanism was invented and patented in 1996. It displays the day, month and date in the apertures.

There is another novelty in the Calatrava collection: the Ref. 5226G-001.

Like the annual calendar time travel, it has a “Clous de Paris” guilloché pattern, or clove, on the caseband. The motif was reintroduced in 2021 on the Calatrava Clous de Paris Ref. 619.

Its similarities to the Time Travel annual calendar don’t end with the vintage-inspired caseback. It also has a gray dial with a gradient black edge and comes with the same beige nubuck leather and embossed black straps.

It also has a sapphire crystal caseback showcasing the movement.

The 5320G is a new version of the Patek Philippe perpetual calendar in white gold with a “rose gold” opaline dial.

The Ref. 5320 debuted in 2017 with a cream lacquered dial. The style is vintage inspired.

It is driven by the perpetual calendar of the self-winding caliber 324 SQ, with day and month displayed in windows at 12 o’clock and the date displayed by the hand at 6 o’clock, as well as the phases of the moon.

It has a chocolate brown alligator leather strap with a white gold folding clasp.

The 5172G chronograph has a white gold case and a “rose gold” opaline dial, as well as anthracite gray hour and minute hands.

It has a central chronograph hand, an instantaneous 30-minute counter at 3 o’clock and a small seconds at 9 o’clock.

The Ref. The 5270 Chronograph with Perpetual Calendar was launched in 2011, representing the culmination of generations of Patek Philippe dual complications originally introduced in 1941.

The new 5270P is rendered in platinum with a lacquered green dial and a black gradient rim, a palette reminiscent of racing cars, the watchmaker said.

It is equipped with the hand-wound CH 29-535 PS Q caliber, the first perpetual calendar chronograph movement that Patek Phillipe developed entirely in-house in 2011.

Patek Phillipe also presented a new version of the Annual Calendar Ref. 5205, initially launched in 2010 in white gold and available in pink gold since 2013.

The 5205R is also crafted in rose gold, but with an olive green sunburst dial with a gradient black rim. The polished case has recessed sides, skeletonized lugs and a concave bezel.

There are rose gold faceted dauphine hands and applied hour markers, along with a rose gold bezel outlining the date window.

The annual calendar displays the day, date and month in apertures along an arc. Created in 1996, it requires correction once a year on March 1st.

The watch is powered by the automatic caliber 324 S QA LU 24H.

The 4910/1200A is its latest iteration. It has a steel case and a bracelet with a folding clasp.

It is powered by the Caliber E 15 quartz movement.

The dial is rendered in olive green with white gold applied indexes and Arabic numerals with luminescent coating. The case is set with 36 Top Wesselton Pure diamonds totaling 0.42 carats.

Related stories will be here…

The universal time mechanism was invented in the 1930s by Louis Cottier.

The new 5230P watch is equipped with the self-winding Caliber 240 HU with world time display that displays all 24 time zones.

Local time is displayed at 12 o’clock, chosen using the single pusher at 10 o’clock. The mechanism for this was patented in 1999.

The platinum case is adorned with a diamond at 6 o’clock. It features a hand-guilloché blue dial with a circular pattern inspired by the Ref. 5110 released in 2000.

It comes on a navy calfskin strap.

Over the years, Patek Philippe worldtime watches have occasionally featured cloisonné enamel maps on the dials. The 5231 G is part of this tradition, highlighting Oceania and Southeast Asia, companion of the Ref. 5231J-001 debuted in 2019 and represented America, Europe and Africa.

It has a 38.5mm white gold case and a matte navy blue alligator strap.

This edition features an olive green dial with a hand-guilloché center in an antique basketry pattern. The names of the cities are represented in white on an olive-green disc.

The 27.5mm wristwatch features 62 diamonds on the bezel and 27 on the buckle. In total, the 89 diamonds weigh 1.03 carats. It has an olive green calf leather strap.

There are diamond minute markets and baguette-cut blue sapphire hour marks. Patek Philippe says the elaborate setting creates an “amphitheater” effect, with the dial in the center.

The dial is in blue lacquer with a gradient black rim and its leaf-shaped hands are in white gold.

The self-winding R 27 Q caliber has a minute repeater that strikes two gongs wrapped almost twice around the movement.

Its price is available on request.

It has a white gold officer style case with straight lugs and screw down bar straps.

The blue sunray dial is adorned with applied Breguet numerals in gold and ear-shaped hour and minute hands in white gold.