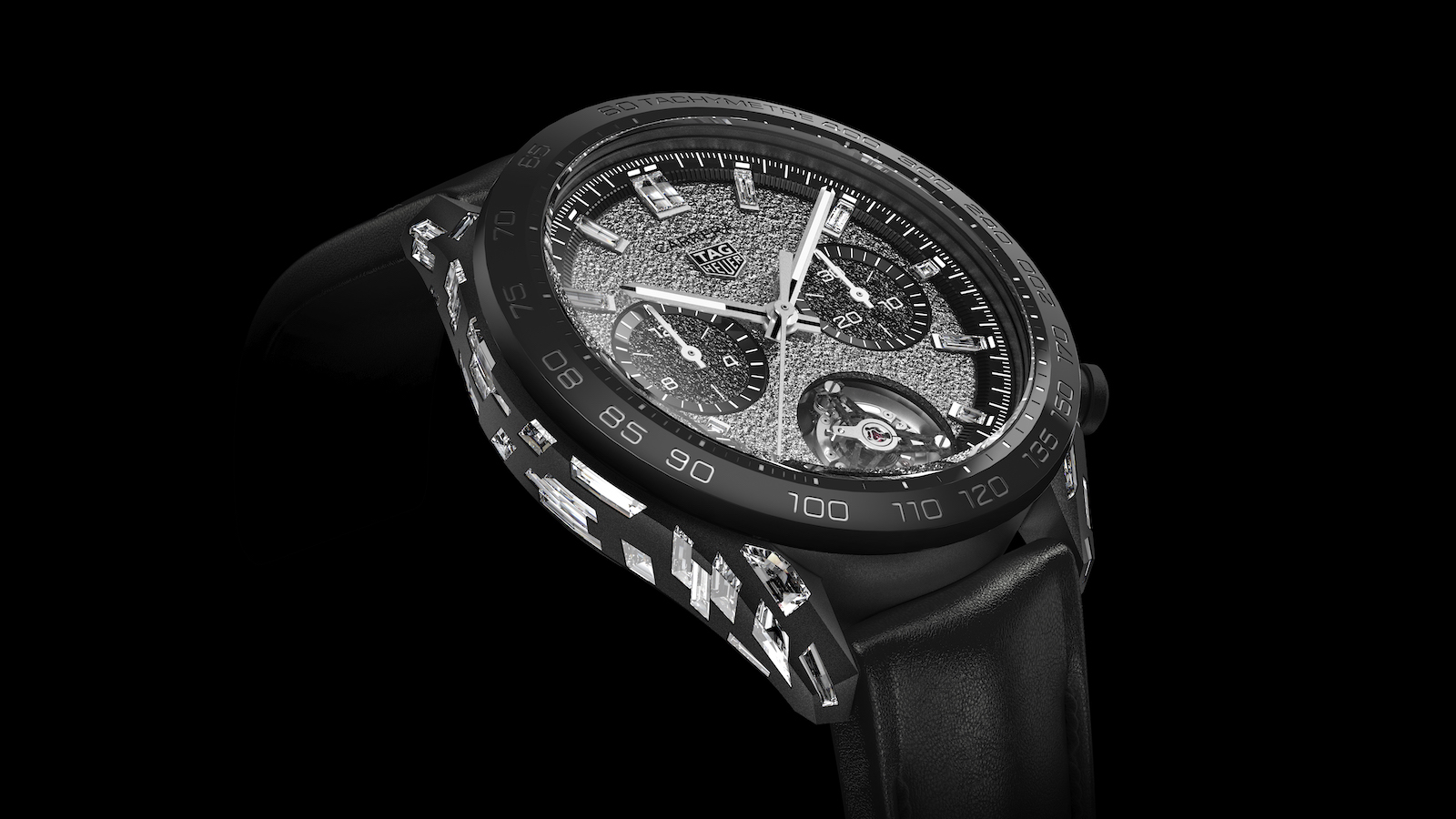 The 162-year-old firm unveiled a slew of truly impressive releases: a throwback to super-performance dive watches with the Aquaracer Superdiver, their first-ever solar-powered watch in the Aquaracer Solargraph and a 2nd Carrera x Porsche, just to name -in a few. But it’s what they’ve saved to last that’s got the world talking.

the TAG Heuer Carrera Plasma Tourbillon Nanograph is the most expensive watch the brand has ever released, priced at a rather punchy AU$518,900. That’s a lot of money for a TAG – but considering how unique and advanced this piece of horological art is, it’s actually a bargain.

Why a good deal? Because this watch is filled to the brim with diamonds, created and used in a way never seen before in watchmaking. This is thanks to TAG’s innovative use of synthetic diamonds. For example, see this dial? It’s not a finish or glass particles or anything like that. This dial is entirely made of polycrystalline lab-grown diamonds. The crown? It’s a whole diamond. Those stains on the case? You see where we are going…

We’ve never seen diamonds used in this way before, and it’s completely captivating. The pictures don’t do it justice: it might be the most eye-catching watch on the market right now.

RELATED: TAG Heuer Brings Back The Most Underrated James Bond Watch Ever

This is something truly radical that will not only change the perception of TAG as a brand, but of lab-grown diamonds more broadly. It used to be that lab-grown diamonds were a dirty word – despite being much more ethical and often much more beautiful than natural diamonds…

But as the Carrera Plasma demonstrates, the real beauty of lab-grown diamonds is that they can be formed into shapes that would never exist in nature, creating something entirely new; unexpected; avant-garde.

“Synthetic diamonds allow us to innovate and experiment with this exceptional material, which opens up a whole new field of possibilities for designers, watchmakers and engineers,” says Edouard Mignon, Chief Innovation Officer of TAG Heuer.

If all those diamonds weren’t luxurious enough, the Carrera Plasma is also powered by TAG Heuer’s Heuer 02 automatic tourbillon chronograph movement, which boasts a 65-hour power reserve and is COSC certified. It’s also rather light on the wrist, thanks to its milled aluminum case and ceramic bezel.

There is currently only one of these watches – perched in the middle of the TAG Heuer stand at Watches & Wonders – but according to TAG Heuer CEO Frédéric Arnault, “more than one, but less than a dozen” will be finally made. Better buy a lottery ticket…

TAG Heuer unveils the $376,000 Carrera Plasma, its most expensive watch ever