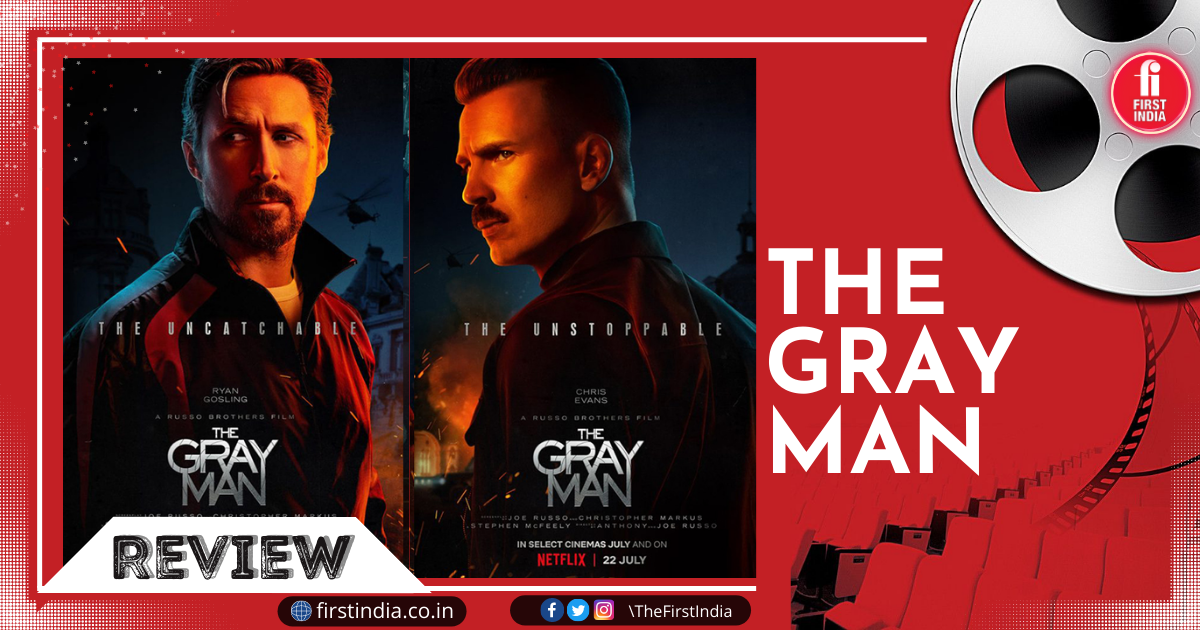 The Gray Man is about moody Agent Six, played by Ryan Gosling, who is rehabilitated as a spy to serve on a prestigious team alongside the CIA. Six learns he could kill an innocent person while doing a job where he has to “eliminate” the target. He stops to collect the pieces and learns the dark truths of his organization. Going rouge begins a mind-blowing game of Action-Chase sequences supposedly for a USB drive!

The Russo Brothers’ spy action-thriller is a messy must-see made possible by dual leads Ryan Gosling and Chris Evans, complimented beautifully by Indian star Dhanush. Although featuring a basic storyline, the incredible shots, outlandish action, and gripping commitment to performance from the star cast manage to ease the 2.5 hours of screen time through.

At least justifying the tag of Netflix’s most expensive production, shots are fired, helicopters and buildings explode, and there’s even a hand-to-hand combat scene between Six and Lloyd. The movie seems to be made with specific fans in mind. The visuals focus more on aesthetics and in a classic russo style, non-verbal details are prominent throughout

Gosling plays him relatively straight, though Sierra 6’s real name is Courtland Gentry, a dark, invisible but invincible spy. With a mix of “Blade Runner” and “Drive” vibes, Gosling manages to pull off Six’s character perfectly. Top management, perfectly executed by Rege-Jean Page (aka Denny Carmichael), the Bridgerton star who stays true to his signature style, asks one of his top executives (Jessica Henwick) to hire the psychotic Lloyd Hansen by Chris Evans to capture the impossible Sierra. Six. A refreshing break from ‘Captain America’, Chris Evans’ (Lloyd Hansen) character asks Ryan Gosling’s character ‘Six’ at some point how he knew Chris was actually Lloyd given that they didn’t had never met. In his second Hollywood production, Indian sensation Dhanush makes a grand entrance. Additionally, he can show off his combat prowess by engaging Gosling and Ana de Armas in a lengthy action sequence. Although he gets more screen time than expected, Dhanush only has a few words to say during these times. Since spies, at least conventional spies, are supposed to do more than they claim to, this actually seems reasonable. He may be the only character in the film with a strong moral compass and definite roots, which the Russos emphasize by having him touch a precious rudraksh mala early on. Subtle.

If you really have to cut to the chase, this persistent but slightly above-average action film has only three or four components: artists who know their stuff (thank goodness), surprisingly incredible work done by the actors of support, maximum use of the Netflix budget, smooth action motion, and lots of phone chatter (perhaps an ode to the good old days, I suppose, with USBs and radios and phone calls, that seems way too much nostalgic for 2022 audiences.)

Mainly a “unique watch”. For fans of spy thrillers, The Gray Man is a visual delight. But that’s basically it if you’re looking for a script or a creative out-of-the-box production, you’re sure to be disappointed. If you’re a Russo fan looking for an “Avenger’s Endgame” expansion, disappointment awaits you all the same.