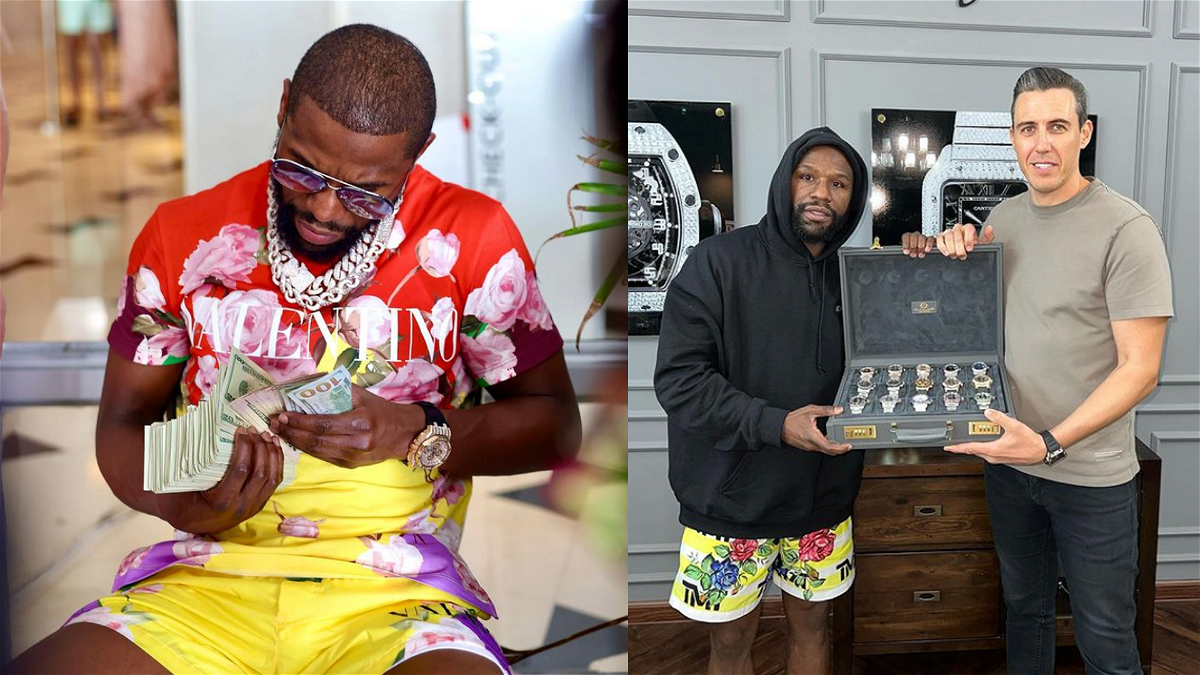 What is the most expensive watch owned by the richest boxer in the world Floyd Mayweather?

One doesn’t simply get a nickname like ‘Money’ without a lifetime of exorbitant extravagance. Additionally, the champion was open about his deep love for highly ornate watches.

The Mayweather watch collection has over 40 watches. And, the collection is worth nearly $30 million.

The Mayweather watch collection consists of many unique pieces.

However, one particular beast in his collection requires special mention. Mayweather owns a “Billionaire Tourbillion” watch made by Jacob & Co.

The watch is encrusted with 239 emerald cut diamonds on the outside. And, the diamonds totally go up to 260 carats.

Meanwhile, the inside of the watch is just as impressive, if not more so. The watch follows a skeleton style, which allows the user to see the internal mechanisms of the watch. Additionally, the “great magician” of timepieces boasts of a Swiss-made movement and a tourbillon. Notably, the tourbillon is a mechanism that helps counter the effect of Earth’s gravity on the isochronous properties of the watch’s internal mechanism.

But, all the awesomeness comes with a hefty price tag. The Billionaire Tourbillion would cost the modest sum of 18 million dollars.

Is Floyd Mayweather’s Billionaire Watch the most expensive watch in the world?

The Billionaire Tourbillion is certainly a beast in its own right. However, the watch only ranks 7th on the list of expensive watches.

The title of the most expensive watch goes to “Hallucination” by Graff Diamonds. The watch has a platinum bracelet encrusted with 110 colored diamonds.

This hyper-expensive watch is said to cost a staggering $55 million.

How many expensive watches does Floyd Mayweather own?

Mayweather’s collection also boasts of many other expensive watches. Moreover, the champion has also presented his impressive collection several times on social networks.

A standout piece from his collection is the ‘Patek Philippe Nautilus 5723/1R’. However, the watch comes at a rather modest price compared to its hyper-expensive collection. The watch reportedly cost the champion $350,000.

Another important piece from his collection is the Jacob & Co Royal. The diamond-encrusted 18-karat white gold watch cost the champ $1 million.

In fact, it seems Mayweather has a special love for Jacob & Co. And the jeweler is the champion’s go-to brand for intricate timepieces. One notable watch he owns is the diamond encrusted “Rainbow Tourbillion”. Mayweather reportedly paid $2 million for the watch.

What do you think of Mayweather watches? Let us know in the comments below.